A Sketch from the Citadel by David Roden

A SKETCH FROM THE CITADEL

Post-induction, she had them buckled and hooded. Their mouths seeped through ball-gags and wet strips of cloth.

The concubines had returned to their distant quarters. She was back at the Processing Yard where drugged internees were decanted over the cavernous staging area. She saw them always from a great distance, as through a long tunnel. Even in their inert state, she felt they expected something of her.

His straitjacket prolapsed red across white, petals and coils, a sour stink of stomach acids and excrement. The way he cradled his viscera so tenderly; the way blood-flecked saliva bubbled until he shook. She removed his gag, shrugged off her short silk gown, put away the gutting knife, allowing the miracle of his tongue to sting.

He rose to the occasion, extended a cooling body. She convulsed as he died, aware of the chained eyes of the inductees egging her on; learning to appreciate her.

They had lived beyond the black bulwarks as mothers, fathers, lovers, students, artists, bureaucrats, thinkers; now reduced to anonymous toys - Citadel carrion, as she had been once. Yet she craved their attention and more. Power in the Outside was anonymous and dispersed. In the Citadel it accrued into spectacle then mutated into something else.

She relished all the contradictions this visibility entailed. For today, she appeared to them in well-fed, sore and scabbed flesh. She wanted to understand what it was to inexist. They could help each other out.

That night, she had phoned in another team from a nearby arsenal. They journeyed through the sinuous tram-shafts, burrowing in ancient catacombs webbed with gantries and girders in a substructure of pure imperviousness, Primary Matter.

The two male concubines touched her tentatively, afraid to hurt her until ordered to. But they soon got the hang of snagging breasts in teeth, pinching, licking and raking, before they slipped into her with the modesty of their kind. The women kissed and cut, leaving her red-burning, wet and angry.

The condemned, at least, would appreciate the incongruity while the Clock Guards - heavy industrial automata with a minimal regard for human anatomy - beat a select few into red pap. They killed slowly yet were indefatigable once the order was passed. This instructional process always seemed about to plumb her capacity for horror but never exceeded it.

At her panoramic window, she stared out across the winding tunnels and the minatory prows of Black Ships floating on Void Winds between the Dolorous Cities, rearing thunderheads from the Citadel’s prime substance. The Ships waited to drink her as they waited to drink them all, before the entire assemblage halted, screaming its insolent prayer at the final emptiness. She was changed utterly. On the Outside she had never wielded power or appreciated how it damned its possessor. Now it was a weapon for that which waited across light centuries of glacier, under the collated facsimiles of former galaxies.

The Clock Guards stumbled out of pools of blood mash and splintered bone, gauche as baby crabs. One day, she would order them to pick her apart, then to deconstruct themselves, claw out their synthetic muscles and camera eyes. She would tell the condemned to watch carefully. It would not be justice. There would be too much pleasure in it, and death would be but a hesitation before the Ships.

And perhaps this alone bothered her. If perversion was the rule, where was she? What could she do, who came from nowhere and would never return?

From the Outside, the Citadel is finite, local, secreted in a waste quarter of every city: a baroque town house reserved for silent ritualists, a fortress, residue of a defunct police state, a chateau crumbling in the heart of a decaying steel works. Nervous magistrates concoct paper misdirections to ratify the internees’ disappearance, implicating them in corruption, theft, prostitution or child murders. It doesn’t matter if they are punished justly, only that the greater mass believes it. Yet from the Citadel, the Outside is irretrievable. An idiot loneliness. 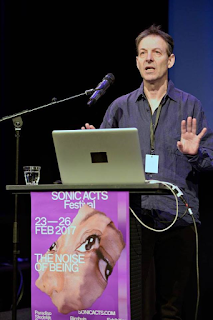 David Roden is a philosopher and writer interested in alternatives to being human. His book Posthuman Life: Philosophy at the Edge of the Human was published in 2014. His experimental prose work has been published in Gobbet, Dis Magazine, Surfaces and Sunk Island Review.

on March 30, 2019
Email ThisBlogThis!Share to TwitterShare to FacebookShare to Pinterest