Here we go again,
sat alone
in front of a notebook.
The flat settled down for the night,
everyone asleep but me.
I hear my boyfriend move in bed,
most likely stretching out,
reaching
but only finding space.
Gripping my pillow
he dreams it’s me he’s hugging.
Actually,
scrap that,
he’s dreaming of me fucking him,
but the only thing I’m fucking is my patience.
My cock agrees with me and out of spite
shows me how easily it can sleep.
It dreams of fucking my boyfriend,
together they cum in dreamland.
I don’t even get to watch.
Brain censored
like Tumblr in 2019.

If I knew the key to sleep,
I would follow the rules,
write a poem that rhymes,
but that would be a cliché
like a French guy that mimes,
the white stripes of his tight fitting top
taut over his muscles.
I could get lost ripping it from his skin…
Snorting it clean of its lines,
I push the guy into the black void that’s left.
Even a quick daydream is torn open,
spitting me back to the awareness that
my cigarette lies smouldering on my groin.
Fucking Marlboro,
not content at shortening my future,
it wants to sabotage my present.
Sorry,
I don’t need that kinda shit,
and to think I happily feltched smoke out of its ass.

I blew that smoke up God’s ass.
Stole the occasional lick,
hoping my tongue would tingle His rosebud into bloom,
watered by my saliva.
Only I’m like an ant trying to fuck a body
lying naked on the grass in the summer sun.
My un-consented kiss on His butt
is punished by my continual existence;
living face up,
mouth open for the next ball of shit
He needs to evacuate from His divine bowel.
I’m not the only one.
One God,
two billion cups.

I’m still awake.
That wasn’t a micronap flash-mob of a dream.
Those were waking thoughts.
That is what keeps me awake.
The stuff of dreams preventing me
from dreaming.
My boyfriend moves again.
His sleep talk bleeds from the bedroom to my ears.
I could be in there fucking him.
I could be,
but both he and my cock are asleep.
If only I could make insomnia my bitch.
Tonight, however, I’m hers. 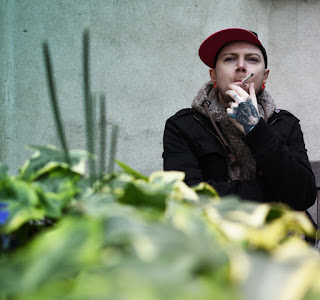 Suffering from psychosis since the age of four, as well as being on the Schizophrenia Spectrum, Dominic Lyne has been diagnosed with Dissociative Disorder and Borderline Personality Disorder. All of these mental health issues bleed into his work through his creation of claustrophobic landscapes and offer the reader an insight into his world, the world he has created and mutated in his physical reality.

on March 15, 2019
Email ThisBlogThis!Share to TwitterShare to FacebookShare to Pinterest