Weidmann Appeared Before You by Jonathan Kemp

WEIDMANN APPEARED BEFORE YOU

Let us say now that her carnal pleasures never made her fear the wrath of God, the scorn of Jesus, or the candied disgust of the Holy Virgin, never until…

Something makes you look up from your book, perhaps some instinct or unconscious signal - some scent perhaps, or a sixth sense you’re not aware you have. There, two seats in front, on the top deck of the 106 to Finsbury Park, your gaze falls on the back of a boy’s head, a glorious crop of luscious dark brown curls, the lick of its tail at the nape is skewed slighty off-centre & such imperfection makes the sight even more precious. You fall into thinking about the erotics of hair. Why women of certain faiths are commanded to cover their hair lest they incite men to lustful thoughts, making their minds stray to the other hair between her legs. You think about the boy’s body hair. Is it plentiful or scarce, clippered or running wild?

He has his right arm in a sling, and the injury makes him more beautiful still; even though at this point you cannot see his face beyond the quick glimpses of a Roman nose when he turns to look out of the window; a profile of most noble horniness. You find yourself abandoning the book momentarily so you can enjoy the vision before you, the random, unexpected beauty of the back of his head and neck, those well-built shoulders in washed-out salmon jersey cotton, that fits where it hits, showing off his beefy arms. It’s as if you’ve just wandered in off the street into a gallery & found a painting or a statue that you cannot tear your eyes away from. He can’t have any idea how hypnotically beautiful the sight of him from behind is, with those tempting snatches of that profile of a god. His skin is creamy, dreamy, his stubble sparse & lickable.

You wonder if it’s appropriate to objectivize him like this but know, deep down, that it is. Or at least it is a habit so instinctive that it’s become second nature to you. You remember B saying, ‘I don’t mind of you objectivize me; go ahead’ as you gazed at him, stroked the firm furred ass, drank in the sight of him.  You’ve never bought that it is dehumanizing, or rather if it is it’s a universal experience: to objectify and be objectified in turn. We are all both subject & object. To objectify a beautiful human doesn’t rob them of their subjectivity. The recognition of another’s deep, complex subjectivity is a radical act of intimacy. It is overwhelming, vertiginous, both terrifying and liberating. You don’t know where you end and they begin, so much are you a product of their own perceptions, imagination, and desire, & they of yours.

You look down & return to your book & read Genet’s words: “The Eternal passed by in the form of a pimp” & they seem to sing in a way you’ve never heard before. For Genet, in that scene, in his cell devising stories about hot murderers & well-endowed criminals to get himself off, “merely to have mentioned him is enough for my left hand in my torn pocket to… And the memory of Darling will not leave me until I have completed my gesture.” That ellipsis – that wank – occurs outside of language, an act only suggested, left to the imagination, rather than described. He leaves the reader (who he sees always as a bourgeoisie straight white male) in no doubt what he is up to. Instead Genet describes the fantasy that gets him off:

He appeared standing before me with the same graciousness that might have been his lying naked in a field of pinks. I was his at once, as if (who said that?) he had discharged through my mouth straight to my heart. Entering me until there was no room left for myself

Genet concludes this portrait of Darling with the statement: "If I think about him, I can’t stop praising him until my hand is smeared with my liberated pleasure.”

For Genet, to objectify a desirable male is an act of praise, the pimp is raised on a pedestal of Genet’s making, enrolled in a sexual fantasy that elevates him to the very top of the angels’ hierarchy. 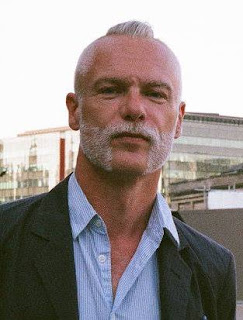 on March 11, 2019
Email ThisBlogThis!Share to TwitterShare to FacebookShare to Pinterest