Words of Christ in Red by Esther Betts

WORDS OF CHRIST IN RED

I fucking hate alcoholics. They're weak, miserable people and should all be sterilised, reads the facebook comment.

I can’t say I don’t feel defensive, after all, I am an alcoholic. At least was until about two months ago when I quit. New Years it what drove me to stop drinking, before I even got to pre-drinks I’d already had four cans of IPA and some tequila shots. I threw up on the way to the bus stop but that didn’t stop me. At pre-drinks I drank whatever I could get my hands on - including other people’s drinks - sambuca, vodka, lager. I blacked out and none of my friends will talk to me now; but someone told me it included me breaking their television. I wasn’t violent, just out of control. The fear of not knowing what I’d done drove me to visit multiple AA meetings and set me on the rocky road to sobriety.

It is also arguable that I’m weak and miserable, thankfully I’m already sterile, so that part wasn’t up for debate. Alcoholism has a way of making you feel weak and miserable in such a way that you begin to identify with your weakness and your misery. You begin to feel proud of your own self-hatred. For a bit I was proud that I had broken their television, I was proud that I was such a scumbag, it made me happy.

I was happy because I could use it as an excuse to keep drinking - but at that stage I was forced to choose between booze and everything else. I was forced to do away with that mindset and all that was left was the deep shame of everything I had done.

So I can imagine the reasons why Jeremy Udburgh made this comment on faceook which I browse absentmindedly whilst I should be looking for work: he hates alcoholics. A lot of people get hurt by alcoholics; maybe an alcoholic broke his television.

To an outsider it can look like the person who just can’t stop drinking is weak. Most people are able to just have one drink and stop; or are able to stop once they notice they are drunk; I can’t do this. I know a lot of people will not accept this but to alcoholics booze actually is just more addictive. I theorise there must be something different in our biology. It’s true I can’t stop drinking if I start but

I’m also able to drink a lot more and not get drunk.

I also never get hungover. The morning after the television incident - I felt the mindnumbing shame I always feel after drinking - but I didn’t feel hungover. I felt mildly groggy but I had some coffee and I was back to normal. Usually at that point I would turn around, open my fridge and take out a can. My sister is the same in regards to not getting hungover; I am constantly warning her to watch her drinking so she doesn’t end up doing what I did.

So I know the reasons why Udburgh might think alcoholics are weak and pathetic but as well as being a junky for alcohol I am also a junky for navel-gazing. I want to know what this total stranger who I have never met and likely never will meet thinks of me; an alcoholic. I fire back. Why do you think that?

He’s a portly middleaged man, balding, Homer Simpson-esque. He comes back from getting himself a coffee and sits back at his desktop. He works from home, so he gets to browse the internet all day whilst sorting through e-mails that he gave canned responses to. Please refer to our renewal policy, yours sincerely, J. Udburgh.

It was mind-numbing work so he decides on another break and checks his notifications: Why do you think that?

Jeremy Udburgh thinks hard to himself

Fuck, where do I start? they’re alcoholics; it’s simple. I don’t know who this person thinks she is anyway? Why does she care so much about alcoholics? Nobody cares about them and nobody should. They’ve ruined the high street; I can’t even fucking get a coffee without one of them grubby, greasy, smelly little buggers mumbling at me asking me for money. You see them huddled next to the cash machines waiting to abuse innocent hard working people who are just looking to withdraw some money.

Fuck, this reminds me of that one scumbag I saw on Park Street. It was raining and I was just trying to get to the bus stop. He was sat in a shopfront and bawling his eyes out like a fucking baby. ‘Please, please,’ he cried. I was so close to punting him; please what? Please give me money so I can spend more of your hard earned cash on alcohol? The moment anyone gives him any money he’s stopping his crying and walking straight to the off-license.

I don’t believe they are truly addicts; we all like a drink, they just lack selfcontrol.

I wonder why the fuck this Edwarda person doesn’t get this. What universe are they living in? I hate alcoholics, all my good hardworking friends hate alcoholics, why the fuck don’t they agree? I’m a little bit angry at her, I’m so lost for words! I know what to do though. Everybody knows alcoholics abuse and belittle their families; their families get in the way of their drinking, so they hate them! See I don’t really care about the alcoholics themselves but I care about their victims.

Edwarda is spitting on the suffering of hundreds of wives and children by refusing to hate alcoholics. How do I know she doesn’t hate alcoholics? If she did she would have just liked my comment like everyone else has.

I have no first hand or second hand experience of alcoholics but I know enough to imagine what it would be like. I’m going to make this cow feel bad for what she has done.

I have a friend whose dad was an alcoholic. Every night her dad would come home drunk and beat her with an empty wine bottle! Then he would go out to the off-license and buy more wine. He’d force her to stand in the living room so he could throw the empty bottles at her every time he finished one. He did this every day to her until she was 16! Are you saying that she doesn’t have the right to hate alcoholics?

I knew he was lying but I couldn’t prove it so I decided to ignore him. I don’t doubt something like that could happen but it’s by no means typical alcoholic behaviour. I don’t know how to respond to something that rests on an assumption which isn’t true. I also didn’t feel like he was making an argument; he was just trying to make me feel bad for disagreeing with him. What of my original curiosity? Why does this man hate alcoholics? Well I guess from his comment he hates them because he thinks they abuse their families.

I felt a certain sourness in my mouth and I decided to step away from the laptop. No matter how much I improve there will always be people like Jeremy Udburgh who think I’m scum who throw bottles at children. I never acted violently towards anyone whilst drunk; at least I didn’t think I had. It dawned on me that I had blacked out on New Years and that I didn’t know what I had done other than break the television. Oh my God, I could have done anything.

He had mentioned wine in his comment and that’s how I was feeling. I checked my bank balance: £0.34. I guess I could do what I’d always done and shoplift or beg my friends for a drink. I remember going into bars and simply waiting for people to abandon their drinks and then downing them. I got banned from so many places that way. One time whilst already very drunk the bartender called out my minesweeping activities. I climbed onto the bar and tried to suckle the booze directly out of the taps; then the bouncers walked in and dragged me out.

I’m never going to do that again but regardless; I can’t get away from the fact I’ve already done it. Out of impotent rage; originating from my inability to respond to such a man; I picked up my empty coffee cup and almost threw it at the wall. I stopped myself though; I’m too old to act like that anymore. 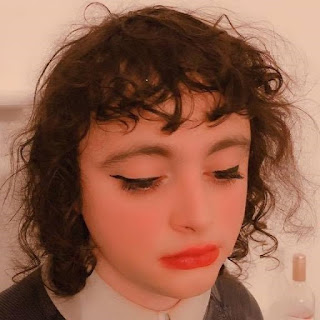 Esther Betts is an aspiring writer and university drop-out born in Scotland but currently residing in Bristol. Betts is interested in a wide range of ideas but particularly those attached to shame and identity.

on March 08, 2019
Email ThisBlogThis!Share to TwitterShare to FacebookShare to Pinterest