There is no poetry in a life that was born
without love
and suffered till it died like an animal.
I try to feel as lucky as my family
tell me I am for not being war-torn,
rather than guilty.

How can we be grateful for things
not experienced that still haunt?
These images of brown people
turned ghosts by ash and fallout,
the sight of their blood the only sign
they’re alive,
is a cultural whip to keep us on our toes,
their mouths silent, too familiar Os.

Scrolling through the news shows me
government brutality in my own country,
someone’s cranium unable to contain its blood,
then a Cosmopolitan article,
’12 Things About Missionary That Men Love’.
A reporter recently confessed
that women are still having sex
in places reduced to ground level and dust,
unable to grow.

So morbid curiosity for the rest follows,
periods, childbirth, menopause,
perhaps someone near a bombsight
is plucking eyebrows or rouging lips
like liberated concentration camp victims.
In this moment we are survivors.
We don’t talk about the dead amongst us,
or millions of parallel fibres. 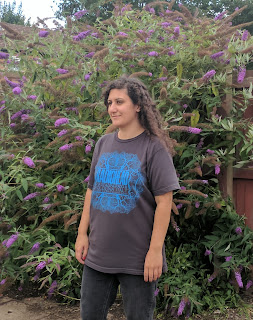 Setareh Ebrahimi is an Iranian-British poet who lives in Faversham. She released her debut pamphlet, In My Arms, from Bad Betty in 2018, and regularly performs poetry live, most recently featuring at Words at Waves at Harbour Books in Whitstable.

on April 20, 2019
Email ThisBlogThis!Share to TwitterShare to FacebookShare to Pinterest