When I woke up from my nap, I heard singing. I drowsily tip-toed downstairs and went
outside to find my father had tied my younger brother to the pear tree and was whipping
him senseless; it was clear from the precision of his whipping, father had done this
before. I saw the pear tree was flowering and my father was singing and tearing my
brother's favorite Ben Sherman shirt to shreds, along with his petal-soft skin. Sensing
my presence, my brother looked at me and laughed, and my father paused for a
moment. Son, he sang, there are complexes we still have no names for, then resumed
his whipping. My heart was flooded with envy, like the banks of a river in a derelict but
picturesque town, very much like the town we live in, yet I was not certain who or what I
was envious of: my father, my brother, or the whip. 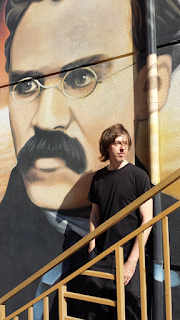 Alistair McCartney is the author of two novels, The End of the World Book (2008) and The Disintegrations (2017), which won The Publishing Triangle’s Ferro-Grumley Award for LGBTQ Fiction. He is currently working on his first book of poetry and hybrid texts. Originally from Australia, he lives in Los Angeles.

on November 13, 2019
Email ThisBlogThis!Share to TwitterShare to FacebookShare to Pinterest