The whole five-minute film was
pixelated
except for the rubber masks of the three men
exhibiting the
vacant arrogance of Tom Cruise, John Travolta and Simon Cowell, the last
looking somewhat gormless
like he had been watching cartoons while snorting coke for most of the day
like the real Simon
Cowell.

Travolta was naked/handcuffed to a chair while Cruise hit him.

“You could make out Travolta’s erection; you could see that he came; you
could
see Cowell
(on the floor/in the corner/all alone/touching himself) coming; only Cruise
remained intact/unerect/silent,” Sight and Sound poeticised.

As Cruise ripped off the Travolta mask
from the masochist’s head; just before we
could see the swollen/bloodied
face
of the actual person
(possibly Charlie) the cover of Lilith Johnson’s
new book, Daily Rituals for the Extravagant Pervert, flashed over the face.

YouTube pulled
the advert within the hour. Only Channel 4 showed it after 9pm without stating
who paid for it.
Penguin Random House denied everything. “I have no idea who made it.
A fan maybe.
It was so fucked up but not as fucked up
as the book,” Lilith Johnson cheekily said in the Daily Star.

My client, _____,
had a dream of being inside a circular temple in the desert and finding a
peculiar
version
of ancient Greek engraved on a golden altar in the centre of the otherwise empty space,
which turned out to be a real language,
Coptic.

“The gnostic writings
were transcribed from Greek into Coptic,” I said. He was silent for 21 minutes.

“I wiped myself clean,” he finally said.
“It was
different from last time, when the spaceship
shot through my bedroom window (it was closed
but no damage) hovering over me. I was being pulled
out of myself by its intense circular light beaming down, dragging me
up, me/not me/my soul/
whatever,
then I shot my load.
This time, like I said, I was just sad, before, during, after, but I did come
like a life affirming bleep
on the heart monitor. I saw the nurse
in my mind’s eye,
but she wasn’t real enough. I’m pretty sure you’re
responsible for the
alien wank. Alien Cum Fest is behind you
on the bookshelf.”

“I saw a man with a TV set over his head
walking along my street holding a 1950’s TV in his hands,
which he
placed next to my front door, ringing the bell
as he kicked in the screen
and then ran
away. I
watched him from the
upstairs window,” I
said to
my
therapist, “wondering why.”
“Do you think a client?” she asked.

A version originally appeared in the excellent magazine, G.O.B. 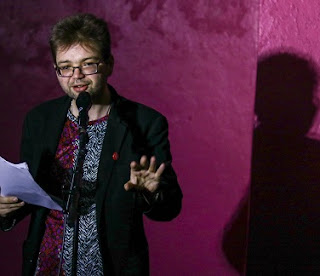 Tom Bland is the author of The Death of a Clown published by Bad Betty Press. This poem is a part of his forthcoming collection, Peeling the Apocalypse.

Buy Tom's book
on December 09, 2019
Email ThisBlogThis!Share to TwitterShare to FacebookShare to Pinterest