THE MARQUIS DE SADE
after Andre Breton
before
he turns over the paper
the Marquis De Sade
bends his nostrils to the gladioli-bud
of some fawning adept’s anus
the delicacy of his hands, his fingers like fringes
his feminine eyes
sees the inevitable arc, in practice, of the philosophy that could only be his
but from the Day-Glo anti-chamber
of oil-burners and lava-lamps, is still issuing strict orders
is it hard work
body-shaming a eunuch?
which rent asunder the prim, drawn moral curtain of night
with its elegant ruches and through that precise slit
we see the Old Frontier draw back, from its grey-vanilla borders where certainty
and modesty
fade
and by this allow us to love each there as we never have
back as naked, baby innocents in some spurious Eden
of rhododendron
and thrusting gladioli stippled with freshets of rain
dildos made of onyx, of whale-bone, dildos made of rain
in the fullness of freedom in
whatever freedom is, in which rain
ignited fire to became a man
for which The Marquis De Sade and his long suffering adepts
defy the centuries
of great trees opening and spreading in spring
after spring,
as acrobats leap through a hoop of fire
clinging to a spar, the lint-rope formed from desire
before
again turning over the paper 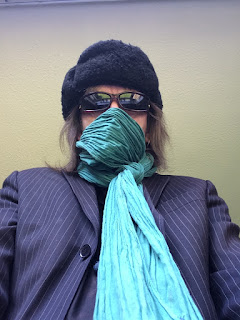 Matthew Caley has published six collections, and has read everywhere from Novi Sad, the capital of Serbia, to Wayne-Holloway Smith's living room, London. He has taught for The Poetry School, St Andrews University, and the University of Winchester. His collection Trawlerman’s Turquoise was published by Bloodaxe, 2019.

Buy Matthew's book
on March 31, 2020
Email ThisBlogThis!Share to TwitterShare to FacebookShare to Pinterest