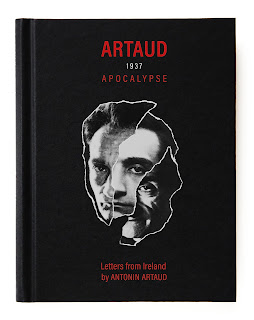 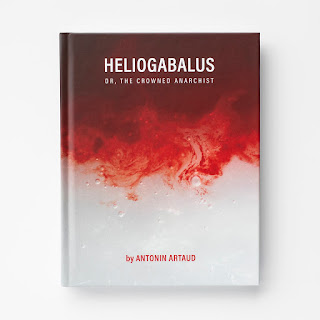 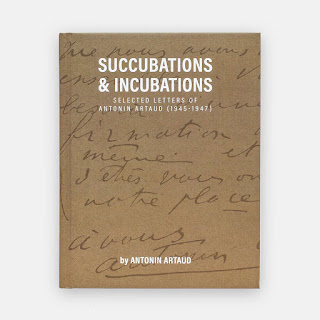 The press is run by the artists Martin Bladh and Karolina Urbaniak. I spoke with them about Artaud, and with two of their translators and interpreters of Artaud’s work, Stephen Barber and Peter Valente.


Artaud...
Artaud used different mediums of expression writing (poetry, prose, essays and numerous letters) film, theatre, sound recording and drawing, and yet he found a way to master all of them and make them his own; even though he went through several inner changes and enacted different roles in his search for the universal symbols/hieroglyphs to the later years “bodies without organs”. Unlike other artists who we like specific works or periods by, we love Artaud’s whole oeuvre from the early experimental books to his last radio broadcast To Have Done With the Judgment of God. - Martin & Karolina
Who is Artaud to you?
For me now Artaud is the set of voices invoking him, the voices of his friends and doctors whom I met & spoke with in the 1980s in Paris, Paule Thevenin, Chris Marker, Gaston Ferdiere and many others, along with Artaud's own voice in his screams for his final recording 'To have done with the judgement of god', which we were able to transmit at extraordinarily loud, death-defying volume via the sound-speakers at the Visconti Studio in 2018 to mark the 70th anniversary of Artaud's death. - Stephen
Artaud is one of those great figures of international modernism who risked their lives to penetrate the veil of illusion in the search for reality; he would write, “The Hindus say that this world is an illusion and that we are part of it and that we must leave it to discover reality.” This search would ultimately lead to failure, madness, and confinement in asylums. And yet Artaud was able to transform the wreckage of his life into an expression of creative resistance unlike anything in the literature of modernism. So much of Artaud’s work needs to be translated, particularly the late writings, for the world to finally be able to experience the full range of his power. - Peter
A black sun. One of the greatest artists of the 20th century. It’s impossible to distinguish his daily, private life from his work: Artaud was for real and he was breathing Artaud 24 hours a day. - Martin & Karolina
Why cruelty?
Well... Artaud has a lot of different & contradictory cruelties, from his early 1930s theatre manifestoes to his late 1940s final recordings, so much better to encourage readers to read all his writings on cruelty and that's really why it's so important that Infinity Land Press and Diaphanes are now publishing new translations or better still texts that were never translated in the first place… - Stephen
We set out to leave a mark, a bloody imprint, and we need a strong reaction from our audience, which can only be reached with the creative necessity of cruelty. Artaud envisioned cosmic cruelty which had no necessary need for physical violence and bodily laceration. He speaks about metaphysical forces of poetry that have the power to stage real-life crime much more terrible than how the actual deed was committed. According to him all life, creation, and transformation is cruel: “cruelty signifies rigour, implacable intention and decision, irreversible and absolute determination”. But he never dismissed physical violence as a part of his theatre: “a little real blood will be needed, right away, to manifest this cruelty”. - Martin & Karolina
In the Theater and its Double, Artaud writes that, on the level of performance, The Theater of Cruelty is “the terrible and necessary cruelty which things can exercise against us. We are not free. And the sky can still fall on our heads. And the theater has been created to teach us that first of all.” What Artaud means is a theater where there is a communion between actor and audience and where gestures, sounds, lighting and strange scenery are used to destabilize rational thought and logic in order to shock the spectator. It is easy to see his influence on performance art, from the 60s to recent times. - Peter
What Artaud words would you have tattooed? on you or your sub…
Instead of a line, I would have a tattoo of the following image: 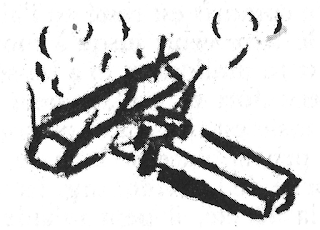 In the letter to Madame Jean Dubuffet (Rodez, November 29, 1945), Artaud writes about this image that it is “a T with two explosions of red flowers on either end to remind you of your true consciousness and so you remember that your life is rooted in the unconscious and against the unconscious." - Peter
We don’t care for tattoos, we prefer scars. Nonetheless, the quote would be: “In the practise of cruelty there is a kind of higher determinism, to which the executioner-tormentor himself is subjected and which he must be determined to endure when the time comes.” - Martin & Karolina 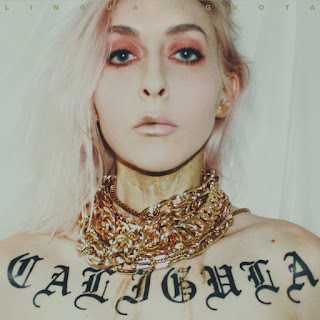 - Stephen
How does Artaud relate to your own artwork?
There is no limit to artistic expression or its means. Artaud = no limits, which is a great measuring road for your own art. People are afraid and should be afraid of Artaud. He was never there for the sake of the greater good of humanity; a prophet of death and destruction. No one dares to read Artaud literally. To realise his work according to its full potential would be criminal as it might involve people being hurt. - Martin & Karolina
Artaud writes that, to understand his “drawings / as a whole / one has to … leave the written page / to enter into / the real.” Artaud’s drawings are a commentary on an “action” that “really took / place.” They “are not / the representation / or the figuration / of an object / or a state / of mind or fear / of a psychological / element / or event.” Rather the drawings reproduce a “magical gesture” that was executed in “real space.” The influence of Artaud on modern art practices is immense. I have been studying and translating and writing about Artaud for years and he has also influenced my artwork. For example, I did the drawing below while listening to the free improvisation group the Schlippenbach Trio: Evan Parker (saxophones), Alexander von Schlippenbach (piano), Paul Lovens (drums). It was a drawing of the sounds in real time, bypassing any attempt at “representation.” 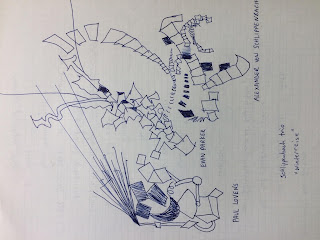 - Peter
Nothing, the current books I'm working on don't have any Artaud preoccupations that I can see. - Stephen
Martin & Karolina really do love...

Three images from the series, The Torture of the 100 Pieces - Bladh/Urbaniak 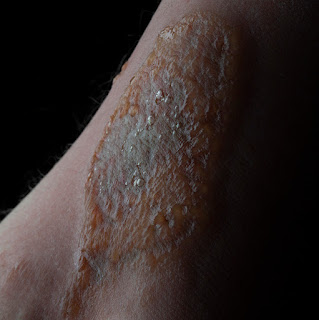 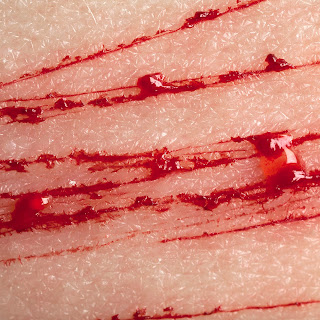 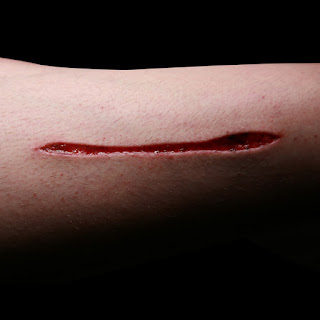 on April 02, 2020
Email ThisBlogThis!Share to TwitterShare to FacebookShare to Pinterest