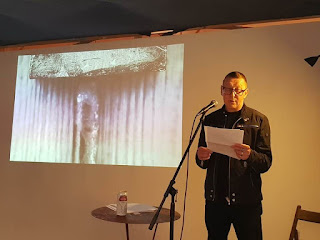 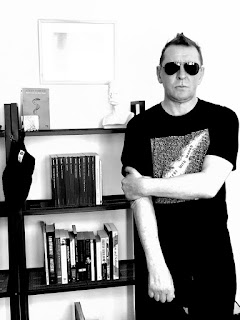 A short interview with the remarkable writer, Steve Finbow. I first encountered his work on necrophilia, Grave Desire, and then discovered he had already written a bio of Allen Ginsberg. Out of the blue I found out he’s friends with the remarkable artistic duo, Martin Bladh and Karolina Urbaniak, who run the amazing Infinity Land Press. His last book was a collaboration with Karolina, Death Mort Tod: A European Book of the Dead, a superb book, which I cannot recommend highly enough.
(I recently interviewed Martin and Karolina on their series of Artaud publications which can be found here.)
Check out his publications -
Death Mort Tod

Allen Ginsberg
I discovered Ballard in my teens when the film Crash came out and I was too young to go to the cinema so I read the book. He spoke of his obsessions as an impetus for his work. What are your obsessions or recurring themes?

I grew up five miles from where Ballard lived – Old Charlton Road in Shepperton – so I knew Ballard’s topography, cycled its roads, watched planes land and depart, walked around the reservoirs. I think I was about eighteen when I summoned up the courage – or had quaffed enough pints of lager – to phone Mr. Ballard (his number was in the book) to ask him for an interview. He was very polite but declined, saying that he had a deadline – no doubt with a large glass of scotch and soda. So I took to walking past his house with its yellow door and overgrown front garden, hoping to catch a glimpse through the dingy net curtains of Jim or at least his reproductions of Paul Delvaux’s ‘The Violation’ and ‘The Mirror’, apt descriptions of Ballard’s prose with its doubles and perversions, its violence and psychological/pathological reflection. My obsessions stem from my early interest in Surrealism – dreams, orgasms, immanence, chance, violence. I was about fourteen when I became interested in Magritte, Ernst, Carrington… and then punk started and then post-punk and industrial and so it all melded together into an obsession with nightmares, paraphilia, death and I found these primarily through writers like Nietzsche, Genet, Burroughs, Ballard, Kavan. So there was a cross-threading of music, literature and art. I was very pretentious and would walk around with Baudelaire’s Paris Spleen sticking out of my pocket, drinking cans of Skol Special Strength because the colour of the can matched the book cover.

Let’s talk a bit about necrophilia. Why fuck the dead?

I don’t think many people have. As far as I can tell through my research, it’s a case of proximity, ritual or psychopathology. It is, arguably, the greatest taboo – even more so than paedophilia or zoophilia. Strange, because there is no real victim. The dead body is merely a receptacle of semen – vaginal secretions in Karen Greenlee’s case – and fantasy. I’m interested in borderline morality and the breaching of rules, not only with regards to sex but also with art – Malevich and Warhol, poetry – Khlebnikov and Mac Low, music – Throbbing Gristle and Whitehouse. People ask why I wrote Grave Desire and it was because I wanted to read about it but could only find legal and/or medical texts on the subject.

One of the things I’m always entranced by with your work is the sheer diversity of influences. I come from the poetry world, where schoolism is a real thing 🤮. I wonder what prompted you to ignore or even fight against sitting nicely in one school of thought…

Well, as you can see from above, I’ve been influenced my many artists. But I don’t really believe in schools. Take the Beats – the writings of Burroughs, Kerouac and Ginsberg are completely unalike. Politically, Burroughs and Kerouac were poles apart. Like necrophilia, schools have to do with proximity – usually an anthology or a group show – so the New York school of poets, abstract expressionism, pop art. I dismiss categorisation. I don’t want a ‘voice,’ I want millions of voices. I don’t want to just write fiction or nonfiction or poetry or essays, I want to be able to write in all forms. It’s a very British thing to pigeonhole an artist to work in a singular genre – “form is never more than an extension of content” – as Charles Olson argued. I’m equally influenced by Clark Coolidge as I am by E. M. Cioran, by Captain Beefheart as I am by Cabaret Voltaire, by Caravaggio as I am by Luc Tuymans. Fuck schoolism.

Have your obsessions turned into a methodology for you?

Do you mean, have I applied my theory for practical purposes? No. Fantasy – be it sexual, violent, artistic – is the realm in which I play out my obsessions. This is from where my writing stems – as in the case of Grave Desire – I’ll think of a subject I’m interested in – necrophilia, illness and creativity, sadomasochism, happiness (believe it or not) – and then look for works on these subjects. If I can’t find anything that fulfils my fantasy about the subject, then I will write about it, as in my next published work The Mindshaft (coming soon from Amphetamine Sulphate). So, yes, in that way, my obsession turns to methodology but, no, I haven’t been breaking into cemeteries late at night with a crowbar and a tube of lube.

Your book on Ginsberg – who is Ginsberg to you?

I was very lucky to work for Allen. Right time, right place. I’m not a great admirer of his poetry – I prefer more experimental writing – but as a writer and a human being, there are not many who are more hard-working and generous. Allen gave freely of his time and advice. And also, through Allen, I met a lot of my heroes. It was a remarkable time – 1989-1990 – I lived in Harlem and then 13th street and 6th Avenue, it was before gentrification in Manhattan – great bars, White Horse, Kettle of Fish, Grassroots and Chumley’s where, on a visit fifteen years after I had left NYC, a girlfriend spotted my name signed on a board on display with the signatures of Faulkner, Dos Passos, Kerouac and Mailer. Looks like the pretentiousness hadn’t gone away. Still hasn’t.

I loved the book of the dead you did with Karolina. Obvs death has been a long-term obsession with me. Being immersed in the histories of death – how did that shape your understanding?

Through illness. I’ve been close to death on at least six occasions. At one point, while
embolising my gastroduodenal and then my splenic artery, the surgeon shouted “Fuck!” When I regained consciousness, he told me if they hadn’t stopped the multiple aneurysms, I would have had ten minutes to live. I’ve also been in numerous comas because of my type-1 diabetes, a notable one while I was living in Chitose, Hokkaido, Japan. So I was interested in death anyway through my artistic interests and then through experience. I’ll quote Simon Critchley here, ‘For human beings, time comes to an end with our death. Therefore, if we want to understand what it means to be an authentic human being, then it is essential that we constantly project our lives onto the horizon of our death. This is what Heidegger famously calls “being-towards-death”. If our being is finite, then an authentic human life can only be found by confronting finitude and trying to make a meaning out of the fact of our death. Heidegger subscribes to the ancient maxim that “to philosophise is to learn how to die”. Mortality is that in relation to which we shape and fashion our selfhood.’ But I would also say “morality” and “art” in relation to how we shape our selfhood. Death Mort Tod was a long project and Karolina Urbaniak created some amazing images to go along with my text and I think it works in its discussion and projection of mortality, morality and art and the transgression of all three.

What else would you like to say about yourself and your work?

At a time when seemingly everyone is either writing or contemplating writing a book, for the first time in fifteen years, I am not writing one. The Mindshaft will be out later this year. I have a novella in a science-fiction anthology (also Amphetamine Sulphate) published later in 2020, maybe a trilogy of sci-fi novellas linked to that as well. I have a huge novel The Tokyo Dead sitting with my agent. I am researching something that will be called Being & Happiness (no italics yet) and copying up twenty-five years of notes on William Burroughs, which at the current rate will  be over one thousand pages in length. I’m also enjoying writing introductions, afterwords and blurbs for people and contributing shorter stuff for journals and magazines.

on April 25, 2020
Email ThisBlogThis!Share to TwitterShare to FacebookShare to Pinterest