Stevie speaks in tongues in an Ibizan bar in the morning,
with spit and sick in his white dirt beard
leaking from the hole in his dear teeth
punched out many years ago.

Stevie stands and then hops, hoping.
One sandal on, one foot bare, toenail long.
A trouser leg rolled up, the other down,
soiled and spattered, he has come a long way.

Stevie rocketed in from the USA back in 86
to be a hippy burning from the inside
with song, space and booze, with idiot dancing grin
Less than holy, clearly a Fool.

He performs for laughs and kicks
jumping onto jukebox high,
snagging smokes with king jester skill.
Stevie shouts. ‘I really love the family of mankind.’

May one of his family clean the vomit from his beard,
cut the nail of his toe, pick his black teeth from the floor,
unroll his trouser leg when he can no longer bend or beg,
and smooth the deep-fried 9am dreams of a trashed old soul. 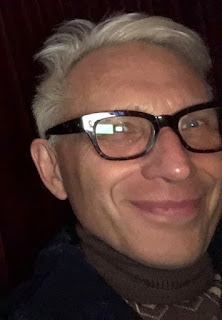