There are few words that can describe the poetry and prose of Johannes Göransson or there are volumes to be written on a man who ventures into areas where not only angels fear to tread but also writers who neatly market themselves to ticket box audiences cleansing the dirt of words to make them so digestible, like the finger food at a literary event, no one even realises they are eating the bites in the first place. His words are like sitting down to eat a blowfish dish that may or may not have been prepared correctly by a chief who spilt just enough coffee on the recipe book to kill you: Johannes' new work, Poetry Against All, is out now. He also runs Action Books, a remarkable press concentrating on translating world poetry into English with Joyelle McSweeney, Paul Cunningham, and Katherine Hedeen.
Johannes' website
Poetry Against All
Action Books 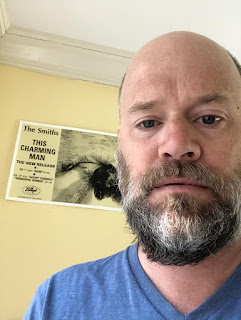 So your new work, ​Poetry Against All​, forms a kind of trilogy with ​The Sugar Book ​and Haute Surveillance​, how did this project come about? And how would you describe the project?

POETRY AGAINST ALL is a commentary on the final writing and editing of The Sugar Book; it may not be the equal of Haute Surveillance and The Sugar Book but more like a parasite book. I wrote the pieces in PAA at first to disrupt The Sugar Book, to insert my thoughts about daily life, diaristic entries about what I was reading and doing, into it in order to trouble the relationship between the author and the speaker in the book. But in the end I decided the effect was too distancing, and what I wanted was a great intensity.

Or perhaps I chickened out, didn’t want to put myself too much into the language of The Sugar Book, a language that is troubling, obscene, mutilating.

Both Haute Surveillance and The Sugar Book stage the connection of certain nodes of interest: race, the law, art. They both started out as a (single) crime book, a detective book. Though perhaps it was from the first more like Tarkovsky’s Stalker than Wallander, or a blend of the two. I read a lot of crime novels and I’m fascinated by crime scenes – the artfulness of them, how the killer so often is portrayed as a kind of perversion of the artist – and how in these books the detective is a kind of narrative-maker who – thanks to various flaws (a love of opera, diabetes) - is occultly connected to criminality, and can thus make a narrative out of the unnarratable immensity of death, giving the killer an interiority, a background, which then allows the detective to find the killer guilty in the eyes of The Law. I wanted to unsettle this dynamic.

And of course there’s a lot about the US wars and US war culture. A lot about how a war like the US war in Iraq cannot be contained, must necessarily affect the people, the culture “back home.” And in the other directions, how this culture shapes the war “over there.” For example, I was very interested in thinking about the aesthetics of Abu Ghraib and various horrific actions, events of war. Ballard describes his work as arising out of his obsessions. What would you say are your obsessions/themes? Are you forced to write by them or do you have some control or choice?

To corrupt Jackson Pollock, I am my obsessions. I’m not sure who or what is in control. Often when I feel the most absolutely in control of my writing, I also feel like I have totally lost all control. And that’s the best writing, the best feeling.

One of the things I don’t think is always noted about your work, is the comical elements of them. Is this accidental or worked into the text? Why is comedy important?

Thank you. I think the books are farcical. I love the travesty, the failed performance. I loved it when – a few years ago – Britney Spears tried to stage a comeback at the MTV music awards and totally fumbled, failed to lipsynch, stumbled around on stage. I love the spectacular and the spectacular failure. I think it has to do with a certain carnivalesque impulse.

In terms of obsessions, both you and Ballard are concerned with finding their extremes, what importance do you find in this approach or the necessity of doing so?

I think all the greatest art comes from following your obsessions, from taking your art to its extreme. So much of our literary culture is to teach Taste, and taste is restraint. That's totally contrary to Art. Most great art is (or was) tasteless. There's also poets who writing interesting work by obsessing over their own tastefulness, creating a kind of pathological tastefulness.

I have noted a kind of occult undercurrent to some of the reoccuring images in your work. Is this something I am projecting or do you secretly cast a circle and raise a demon in a triangle in the dead of night?

It’s common to talk about how media-saturated our lives are. And when you talk about media, I think you have to talk about us as “mediums” for this media: it goes through us. We don’t need to cast spells; we are profoundly involved in occult movements through our everyday lives. But yes, there’s a more traditional sense of the occult that definitely influenced me, going back to reading Poe as a child and I used to see ghosts a lot when I was a child and as a teenager. It’s most clearly evident in mine and Sara Tuss Efrik’s rewriting of my first book, A New Quarantine Will Take My Place, where we used various occult translation strategies, which had fascinating and at times scary results: voices emerged from the text which I had thought was “my text.” Others lived in there.

I’m very much looking forward to your next project, which you have described on Twitter as “trashy sci-fi vignettes. Kind of like Ballard if Ballard was a dead teenager with a kissing disease.” Is it possible to see an example?

Yes, I’ve been writing sci-fi stories packed with genre tropes but also ruined by poetry. Here’s a little excerpt from a story called “The Silver Fluency – A Frenzy” about the problem that everyone who pilots spaceships really want to go of course and be obliterated in space: 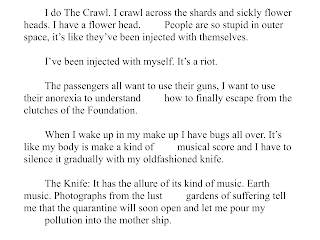 Three books that have really influenced you...

Sylvia Plath’s Ariel first comes to mind. I am especially attuned to the “bad Plath” (I wrote an essay about it here: http://www.srpr.org/files/43.1/review_essay_43.1.pdf), the features of Plath that make her tasteless, the features that critics like Helen Vendler has to distance from Plath in order to make her acceptable: the theatricality, the transgression, the over-the-top images, the suicide myth. These features are part of what makes her such an object of obsession (another aspect the Vendlers of the world cannot stand). I became obsessed with her as a teenager from the first time my friend Seng Chen recited “Daddy” to me in a hallway in high school.

Aase Berg’s Hos Rådjur (With Deer): I read this book when I was at the end of college. I had been taught all the modernist sense of good taste and it had totally given me a writer’s block. When I read Aase’s work – swarming guinea pigs, evil horses, drowning girls - it reminded me of the incredible fairytales and folktales form childhood, but more importantly the thrill of reading people like Plath, Garcia Lorca, Ginsberg, Bruno K Öijer when I first started writing poetry. It threw away all that good and boring taste and let me dig further, get some place more profound. Instead of decorum, it asked for intensity.

Eva Kristina Olsson’s The Angelgreen Sacrament is a wild, ecstatic-mystical poem from a couple of years ago about encountering an angel. It’s both frightening and sensual, a burning intensity. A great example of a text where the author is both possessed and utterly in control.

I think the greatest error that pervades US poetry is the idea that poetry is good, that reading it will make us good. I won’t.

on October 03, 2020
Email ThisBlogThis!Share to TwitterShare to FacebookShare to Pinterest