Secrets – a chapter from Perfume and Cigarettes by Bob Kesh

SECRETS - A CHAPTER FROM PERFUME AND CIGARETTES

Everything was a game of secrets for Sally. There was one you weren’t supposed to talk about. You both knew it was there. This thing between your legs. Deafeningly unspoken. And if you held out long enough, you might slip away and unravel the mystery of each other’s bodies. The difference with Sally was, she made a show of knowing it. It wasn’t a mutual secret – it was yours – one she was always on the verge of telling. You couldn’t win. If you were obvious, she’d get bored and walk off. If you kept it quiet, she’d work you up until your senses went goofy and your words came out in vowels and breaths and moans.

Kole watched her work people up while blowing his horn on stage — standing helpless — only able to close his eyes and laugh through his mouthpiece. He was one of her secrets. She’d message him in the evening, telling her boyfriend it was a girl friend, Koleen. Even that caused commotion, her having dated girls exclusively as a teen, and her boyfriend still reeling from a hetero affair she had less than a year ago. She convinced him it was a girl friend, not a girlfriend, and there was no one in her life but him and her dog, Seguro.

She flirted with women in the crowd. She was more tender with them. The older ones seemed to know her tricks. If it was a guy’s girlfriend, they’d get all excited and she’d bat them away like moths eating at her clothes and keep flirting with the woman. There were all sorts of reactions from the boyfriends, from subtle dejection to being dragged out by the bouncer raging. Kole felt guilty he didn’t stop it before it turned. But it was part of Sally’s game; she pushed them in a corner and watched. As Kole soloed through a chorus, jumping from the home chord to a distant relative and back, he couldn’t help thinking she was doing the same as him: playing into somewhere challenging, knowing how to escape if things got tricky.

​When he introduced her to the band, she stroked a finger down one of Nick’s bass strings — slow enough to hear the ridges rasp over the coils — Kole wasn’t sure if the sight or the sound was more suggestive. She played with the dials on Chief’s keyboard— teasing them between her fingers — Chief froze in anxiety of her messing with the settings and the connotation. She laughed and walked away.

​“She’s not coming to all our gigs, is she?” Chief said, watching her as if he’d discovered trouble had a form.

​While they packed up, Kole patched a worn corner of his trumpet case with a roll of electrical tape he kept in the hidden compartment with his flick knife. Sally saw the knife but she took the tape instead and tied Kole’s wrists together. Kole pulled his hands over her, trapping her in his arms — if he was confined, he wouldn’t be alone — and the two of them moved around the bar as one — Chief, Nick and the surrounding punters stared in silence —  they slow danced, grinding together, Kole thankful she couldn’t escape and leave him stranded with a raging hard-on for everyone to see.

​She stayed at The Waldorf for the week on a fundraiser. When she could, they spent the night hidden in old-man-pubs to avoid anyone she knew. She took to Snakebites: half lager, half cider, with a dash of blackcurrant. She drank slow but huge, thirsty gulps. Her lips, skin, hair all took on the sweet smell of her drink.

“I only wear this perfume with you,” she laughed.

​She laughed, strong and free. “It wasn’t always like this,” she said. “I grew up in Dagenham. A place called Chittys Lane. It’s exactly what it sounds like. I don’t have to explain that to you do I, Jazz-man?”

​His next question cut off as she sunk her teeth into his neck.

The rush of pain and adrenaline washed everything clean. No thought. No questions. Nothing. Moment of peace. She saw he liked it. She took the candle and turned it so the flame pooled wax and poured it over his forearm. It was disappointing. Then they took turns peeling it, seeing who could take the biggest chunk. Here was the real pain. No peace, just acts of violence against the body, the hairs audibly ripping from his arm, feeling the smooth waxiness of his skin and looking at the disconnected pieces of him standing in the upturned curve of wax.

​After several nights, she reluctantly agreed to come home with him. She found the stacks of newspapers an entertaining quirk and Kole was thankful she hadn’t met Tavae. Two bottles of wine later, most of which Kole drank, she rolled her top down and pressed his face into her breasts. He reached for her skirt and she pulled away, redressing and demanded they go look at the Power Station. She was amazed they had such a good view of it from Kole’s estate. It wouldn’t last, she said.

Nina and Marianne came back from somewhere and shared an awkward greeting with Sally. He thought he hadn’t said enough about Nina for Sally to be looking at him like that. They said goodnight and, as they walked away, Sally kissed him, rough at first then passionate. He opened his eyes and saw Nina’s eyebrows raised and her mouth downturned, then closed them again and remembered the word LOVE choking him like Mama Cass’ ham sandwich.

​In bed she undressed Kole and told him not to touch her. She played her hair over his body and it felt cool on his thighs. She found the scars over his ribs, one for each country he’d lived. He tried to cover them but she pinned his arm and kissed each of them. She lay her head on his chest, stroking a finger over the welts. He felt her smile at something then play his heartbeat on his chest making boop, boop, boop, sounds on the beats. His heart was racing. He laughed and she shooshed him and continued. It sounded like Art Blakey’s Mosaic. A song he’d always connected to the excitement of a first kiss. He stroked her hair and closed his eyes, trying to calm his heart. It got slow. Real slow.

It was still dark when he woke. She was gone. The lamp shining through the two empty bottles on his desk. 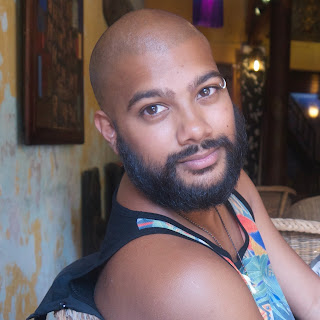 Bob Kesh is a London native who’s lived around the globe. He recently finished the first draft of his novel, Perfume and Cigarettes, on City University’s (now deceased) Novel Writing MA programme. He's working on forthcoming writing and music projects in London. @BobKesh

on October 01, 2020
Email ThisBlogThis!Share to TwitterShare to FacebookShare to Pinterest