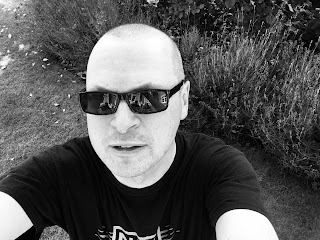 I discovered James Knight after setting up a Twitter account, something I swore I’d never do, but ended up doing anyway, and was immediately struck by the correlation between image and language which rides throughout his work. He draws heavily on the surrealist tradition(s) but he experiments freely through his imagination and technology. He has numerous books out including his most recent Chimera which is sure to blow your mind. 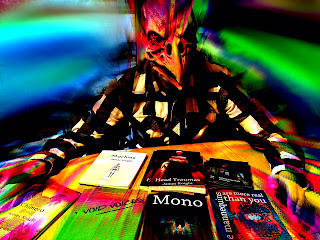 Your new book, Chimera, has recently come out. How did this work come about?

I’ve long been interested in aberrant zooology, both the horrifying kind explored in weird fiction by the likes of Lovecraft and the more ambiguous impossible animals we find in the work of Michaux and the Surrealists. I’m also fascinated by evolutionary biology, particularly as it is explained by Richard Dawkins. In The Blind Watchmaker Dawkins uses simple computer-generated biomorphs to illustrate cumulative selection, images that have lingered in the back of my mind for years. Chimera came about quite organically as I was experimenting with imagery for some visual poems in a series called “Monster”, and found myself making strange biomorphs, which I later put into a sequence suggestive of evolutionary development. I added textual elements too (random cut-ups from Bram Stoker’s The Lair of the White Worm and Wikipedia entries on zoology), which were then processed in various ways so that the words and letters fragmented, inverted or became illegible, mutating with the same violence as the pictorial elements of the visual poems. 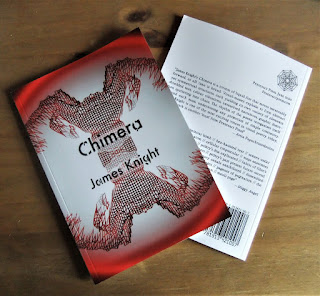 How do you understand surrealism and its importance to you?

Surrealism was a loosely formalised manifestation of the subversive power of the human imagination, something that has existed for as long as we have. I was exposed to surrealist art and literature from a very young age, thanks to my dad’s interest in the movement and some books of his that I pored over. As a kid I saw no difference between surrealist art and illustrated books of Greek myths and the like. Surrealism has always seemed completely natural and obvious to me: why wouldn’t you explore your dream life? However, surrealism as a movement failed in a number of ways, not least in its petty rules and prohibitions, all of which put limits on mental and social activity. 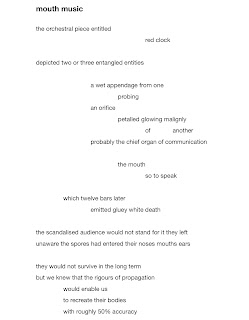 In your novel, Mono, there is a contrast or juxtaposition between image and text. I wonder if you expand on the relation and the distance between them?

Mono started off as a series of monochrome images. Each miniature chapter was written as a free response to one of them. The pictures gave me a starting point, but the words took me somewhere else and started telling their own story. I like strong contrasts, the jolt produced by a picture and a text that don’t marry: the space between the two becomes a playground for the reader.

Transgression is an essential part of your work and I wonder what is essential in this for your practice?

For me, art’s chief value is its voicing of the unspeakable. We can say things through art that cannot be said in any other context without the risk of censure or ridicule. And it’s really important that we do say those things, otherwise we’re alone with them.

Who is Breton to you?

Breton’s poetry has had a huge impact on me, in lots of ways. The poems in his collection Le revolver à cheveux blancs (The White-Haired Revolver) are masterpieces of paranoiac-critical delirium, terrifying seductions. That’s the Breton I love. I’m much less interested in his theoretical writings, which strike me as meretricious; take the first Surrealist Manifesto, for instance, in which he manages to say so little! You can boil the whole thing down to a paragraph or two. 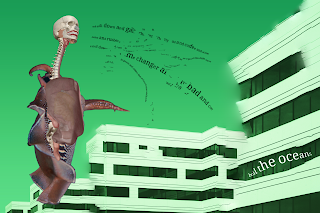 What role does ritual play in your work? Not only your writing practice but also in terms of mask and performance.

Every time I make a picture or a poem or whatever, I’m wearing a mask. James Knight doesn’t exist: he’s a persona. And the Bird King is a persona within that persona. I have to put on the mask to access the part of myself that otherwise would have no outlet, no means of expression. The voices speak through the mask. I’m fairly passive in all this until I have a body of material, and then another part of me looks at the material critically, and the editing process begins. And from time to time the mask is not figurative: I have a hideous latex horror bird mask, which enables me to channel the Bird King and become him in live performance and film poems. It’s difficult to breathe inside the mask, and the heat is almost unbearable! So naturally it is perfect. 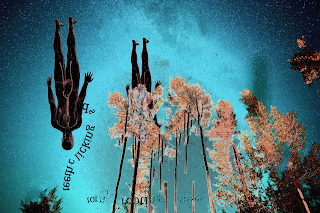 How do you see the importance of dreams to your work?

Dreams are important to me because they represent mental processes over which we exercise no conscious control (unless we are adept at lucid dreaming). The things I experience in a dream state are no less important to me than my waking life. Dreams can linger and colour our feelings the following day. Above all, dreams strip us of our social selves, our pretensions, our carefully constructed identities and value systems, and reduce us to the animals we are, prey to fear and desire. Much of my poetry and artwork taps into my dream life because I consider it key to who I really am.

What are you working on now?

I’m reworking some unpublished poems from a series called Cosmic Horror, and remixing/wrecking some of my visual poems. Some of my best visual poems are the ones that have gone from to all wrong.

on November 28, 2020
Email ThisBlogThis!Share to TwitterShare to FacebookShare to Pinterest