I first encountered David's work in Edia Connole and Gary J Shipley’s edited volumed Serial Killing: A Philosophical Anthology published by Schism Press. They are also the publisher of David's new novella, Snuff Memories, an experimental labyrinth of sexuality, body horror, mutation, posthumanism, and the weirdness of becoming something other than human or what is "conceived" to be human. 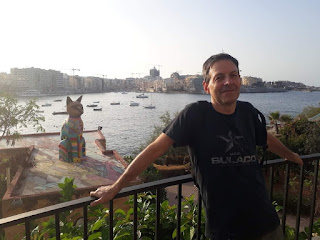 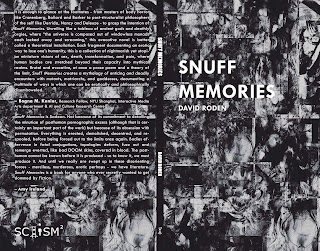 Your new book, Snuff Memories, is about to come out. How did this work come about?

Snuff Memories has its immediate genesis in a prose piece ‘In the Country of the Broken’, published in Gary Shipley’s journal, gobbet back in 2017. But I guess it goes deeper than that for me. I’ve always had a sense that our habits of sense-making are feeble compared with the geologic pull and drift of things. My father had a golden childhood in Czechoslovakia before the Second World War – brutally erased after the Nazi invasion: his immediate family exterminated after he came to the UK on the last Kindertransport. He was perpetually grappling with this ineffable loss that nothing could ameliorate, that just kept returning like tape loop. This, to me, is the only absolute and I respond to it with tactics of abstraction and sublimated desire. An impossible identification, as I suggest in SM.

In an article or interview – I forget which one - the philosopher Nick Land entertains the Marxist heresy that modernity is not about the emancipation of people, but of things – intelligent machines, inhuman systems proliferating over the Earth. For me – maybe for him, idk - there is a profound ambivalence towards this incalculable violence, a desire to be shattered and overwhelmed by it. Skynet wins because we secretly want the future to extirpate us. Modernity has exhausted us even as it continues to ramify. Perhaps the gleaming chromium skull of Things-to-Come will save us from ourselves in the end.

From tape loop to time loop…

My Posthuman Life: philosophy at the edge of the human was an attempt to articulate this moral impasse with the rigor and consequence of analytic philosophy – But that book couldn’t convey the libidinal underside of the posthuman condition – our collective desire, it seems, for a scorched Earth. So, I followed it up with writing on serial killers, shards of poetry, a sci-fi-horror-philosophy montage for the 9th Berlin Biennale, some (as yet unpublished) erotica, all appended to a philosophical output that ‘unbound’ my earlier work on ‘speculative posthumanism’ setting it on epistemic auto-destruct.

‘Broken’ belongs to this disparate series, but somehow felt naggingly incomplete, like disparate samples grabbed from a larger work. I had the insane idea that I wanted to work in a larger format. Snuff Memories is what grew from that seed. 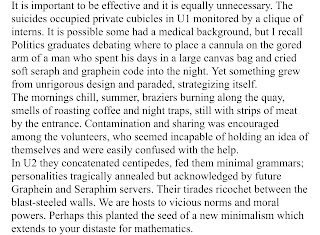 The work focuses on death and you very much utilise the idea of death as an open ended enquiry into its own nature. How do you understand death?

Let’s see - there’s death as an empirical fact, the end of organic life, meaning, consciousness, metabolism, sense etc. A corpse laid out on a hospital bed, shit-stained, bloody, freshly cleaned for viewing, a ruptured body shattered by violence, rotting in filth on a road or battlefield ...

There are the ways we conceive, mythologize, and even eroticize death – all of which seem to invite failure and conceptual collapse. For Heidegger in Being and Time, my death closes off my possibilities, shows that these are always individualized, never interchangeable with others. Thus, in understanding my-being-towards-death I understand how to grasp my most singular possibilities for being. For Hegel, again, death is a negotiable limit that must be overcome as human consciousness attains its independence and (as in Marx) becomes the progressive agent of history.

In an elaboration of this modern, anti-humanist discourse on death, Ray Brassier has argued that the long run effects of physical reality, entropy, and the decay of matter, means that death is no longer proper or unique to the human. Everything dies in the same way. The sun dies as you and I die. Cosmic death exceeds and blanks the horizon of human finitude explored by Heidegger – it is a death we can neither encounter nor identify.

This is also very close to what I have argued is the ‘Posthuman Thought of death’; although, with the posthuman, importantly, there is still a residual connection to the body on which subjectivity, life and ethics depend, a ‘biomorphic’ body exposed to ramifying forces of production which can no longer be subjected to collective human control.

Snuff Memories concerns this impossible non-project; the attempt to identify with and even politicize the inscrutable mechanisms of cosmic death. This identification takes at least two forms. First, the bodily eroticization of death. It is just a given that death, extinction, and pain are what its characters ultimately crave. Neither they nor I give explanation or apology for this. Its narrator, a Wellsian Time Pilot, addresses its prime political mover, the Cabalist saying “Like you, I would die but cannot. Not in a way that might satisfy you”.

But can she really die with more finality or conviction? Later he says of her “You told us the sun will strangle itself with or without our help – But, no matter, let’s help.”

Why catalyse the death of the sun, or the death of God(s), for that matter? I do not think I can answer the questions that the novella sets out, but that they confront us I have little doubt.

Who is JG Ballard to you?

I once told the SF writer Scott Bakker that I was an infant Ballardian. By this I meant not that I read Ballard from an early age – although I did – but that something about Ballard’s writing seemed more familiar, more apt to my lived experience than the capacious psychologies and dense social meshes of mainstream literature. Maybe it is something about being born in the suburbs, having that sense of artificial landscapes under open skies, of an intimate modernity in which the dreams of the late 20th Century could flourish. I sensed the future in the enthusiastic modernity of Gerry Anderson’s Thunderbirds. I rode to the Staines Sewage works (one of the topoi of Ballard’s Atrocity Exhibition) regularly when I lived in Surrey. But more specifically, Ballard is the writer who best captures how our consciousness has been altered by the drug of technological modernity and the reciprocating mechanisms of advanced global capitalism, the way violence and dreams of strange cataclysms are being sold to keep a system which clearly has no purpose outside itself, in operation.

Georges Bataille voiced the idea of nonprocreational sex outside of the lifegiving sanctimony of marriage as being death driven, and that to invert and “escape” Catholicism we must fully embrace sex as death. Is this something you agree with or do you have another kind of perspective?

Somewhat tangentially this reminds me of a recent debate prompted by queer theorist Lee Edelman. He claims that figuring the future in the child – for example, when Starmer portrays Labour as the ‘the party of the family’ – is an inherently heteronormative an exclusionary move that should be resisted by embracing the death drive and rejecting ‘reproductive futurity’. Conversely, this brings home how central reproduction, and the family is to the very idea of progressive politics as we’ve understood it. Even the Marxist/accelerationist idea that our politics should cultivate and extend collective rationality, to dominate domination itself – as Brassier nicely puts it – presupposes that a substrate of intelligence (not necessarily a biologically human one) is reproduced into an indeterminate future. So Bataille’s injunction is very radical indeed. I’m not sure if it is a question of agreeing with it, so much as generatively counterposing its virulence to the procreative infinitude of Reason – exploring its consequences and affects. In a way, Snuff Memories can be assimilated to this project. It is a book that takes the many sides of death. 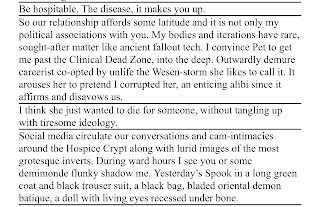 Are we becoming posthuman or is this a way of avoiding the reality of being human?

The theory of Speculative Posthumanism I develop in Posthuman Life argues that becoming posthuman is a rupture, a disconnection from the human (the disconnection thesis) rather than the assumption of a particular identity or nature. But what is disconnection here? In PHL I argue that this would be a kind of technological autonomy with respect to human society and institutions. But lately I’ve asked whether this can be performed in discrete or little ways, micro-disconnections, if you will. The ethical impasse here is that this posthuman can only be thought through its production. To think the posthuman, we must produce it. So, it is like the death drive, fundamentally headless and ramifying. By the same token, if this is right, then becoming posthuman is a real event, it isn’t an avoidance of reality so much as the engineering of a new one.

At the current moment - of course things change so quickly - how do you see the production of the posthuman reality?

There are distinct conceptions of ‘posthuman reality’ that it’s important to keep them apart for analytical purposes. For example, the philosophy of Critical Posthumanism argues that all reality is posthuman (or nonhuman) because the very idea of the human as an autonomous, self-transparent subject is myth whose efficacy is fading. Speculative Posthumanism has overlaps with Critical Posthumanism here, but it is more concerned with the possibility of a rupture or disconnection from the human generated within human technological societies. As I said, I conceive that as a kind of autonomy but I’m careful to argue that there are many conceivable ways in which this could arise: e.g., generally intelligent AI, synthetic life etc, space colonization. The last of these constitutes an interesting test case because the world’s richest individuals – Elon Musk and Jeff Bezos – are committed to either planetary or space colonization, as in the recent proposal to use the raw materials of the asteroid Ceres to create a system of linked colonies with artificial gravity. I lack the expertise to comment on the ultimate feasibility of these projects, but the prospect that humans would adapt to a non-terrestrial environment, altering and augmenting bodies and social systems over hundreds or thousands of years, might well qualify as a disconnection in my sense. If so, space colonization amounts to an existential choice - not to terraform but to xenoform. What interests me currently is precisely mapping the ‘xenophilic’ desire behind this incalculable decision to become our own aliens.

The Crying of Lot 49, Thomas Pynchon

As the transgressive books of philosophy such as Bataille explode in podcasts and social media platforms, do you welcome this or feel it waters down the true value of these ideas?

No. There are some excellent podcasts run by people who are seriously engaged and knowledgeable about this stuff – most of them much better read than me! - such as Wyrd Signal and Theory Talk.

What are you working on next? 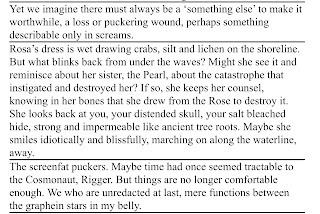 Just to thank you for being such a brilliant and enthusiastic interlocutor Tom. I’ve loved answering these questions, and they’ve materially helped me think through the concepts we’ve discussed. 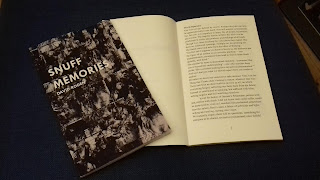 on February 20, 2021
Email ThisBlogThis!Share to TwitterShare to FacebookShare to Pinterest