An inquisitive adaptation of earthquakes by Joshua Martin

AN INQUISITIVE ADAPTION OF EARTHQUAKES

I entered the botanical garden holding a mackerel

at a right angle between thumb and index finger

striving for the perfectly formless variations

inherent in an inquisitive adaptation of earthquakes

as a game of bowling achieved through the mail

while escaping out the backdoor and into stone cold feet

vastly underrated begonias at my heels

until the passed out robotic arms made nice

with the finality at work in abject coffee table

wider than a catacomb and sundry as an ox

where an axe met a track of golden piano teeth

through which I despised as many televisions as

there were to crush the environmental heads

then as now as soon as before as then as underneath

well and fine and good and dwelling still

in a house of stone façade vomiting

though there surely stood enough monkeys

to blister however many t-shirts remained unburned

instead of sitting I watched militaries disintegrate

at 200 mph under the guise of systematic reassurance

scampering beefy thighed wonders in a different zone every day

with a different hazard to scrawl on a tree trunk

around the squares beaming unbalanced politics

while I ventured a question to the refuse bin

as though anyone else was there to judge

then I could somehow justify braided pubic hair

though no one yet had asked to see my chains

though carnivals are still the simplest expression of falling 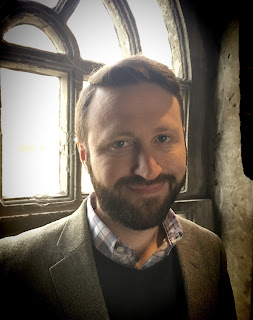 Joshua Martin is a Philadelphia based writer and filmmaker, who currently works in a library. He is the author of the book Vagabond fragments of a hole (Schism Neuronics). He has had pieces previously published in Train, Fugitives & Futurists, Otoliths, M58, among others.

on August 29, 2021
Email ThisBlogThis!Share to TwitterShare to FacebookShare to Pinterest